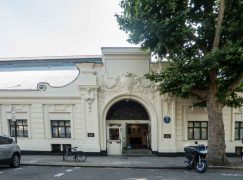 BBC sells off Maida Vale at the worst possible time

Tony Hall’s decision today to sell off the BBC’s historic Maida Vale studios has all the hallmarks of fudge.

The studios occupy one side of a street in one of London’s most expensive residential areas. The time to sell would have been 5-10 years ago, during a property boom when developers would have paid a fortune for the site.

Now, with top-end property prices frozen and Brexit heaving with uncertainty, the BBC will get a fraction of that price and it still has not solve the main problem: what’s to be done with the BBC orchestras that rehearse and record in Mada Vale?

In truth, the orhestras haven’t needed the building for a decade. Since the collapse of commercial recording, London has plenty of rehearsal space to rent – and at a far lower premium than the per-foot cost of Maida Vale.

But the BBC could not make up its collective mind about Maida Vale and Lord Hall is among the worst of its ditherers.

He is now talking of building a big complex for the orchestras in East London. But who needs that? And when will the BBC reach a decision on what exactly is the purpose of its London orchestras?

« On a gay couple’s wedding cake and Bach’s antisemitism

Death of a distinguished German conductor, 87 »