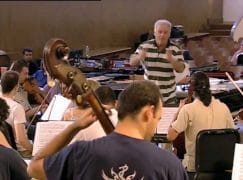 Barenboim calls for compassion in the Middle East

In a thoughtful interview with Asahi Shimbun’s Europe editor, the conductor reflects on the conditions required to deliver progress in the turbulent region. We’re positing this for Prince William to read today as head flies to Jerusalem.

“Neither in the orchestra nor in the academy are we trying to practice a political line that everybody has to adhere to,” Barenboim said. “We believe one thing only, all of us: There is no military solution, there is no political solution, there is only a human solution. I expect them to agree 100 percent on Beethoven. But I don’t expect them to agree on a line for the conflict.”

In the summer of 2014 during an Israeli military attack of the Gaza Strip, orchestra members were split along Palestinian and Israeli sides and heated debate ensued with each side showing little sympathy for the other.

Reflecting on that time, Barenboim said he told orchestra members, “I don’t think that in this kind of a situation of conflict you can expect sympathy. It is not really rational to think that an Israeli will feel sympathy for Palestinians and vice versa. But you must expect and get compassion because sympathy is an emotional thing. Compassion is a moral attitude. An Israeli who does not feel compassion for the tragedy of the Palestinians has no place in this orchestra, and vice versa. I think this is what we have to work for, to get compassion and understanding for the suffering of the other…”

« Detroit shocks Leonard Slatkin on his return from heart surgery