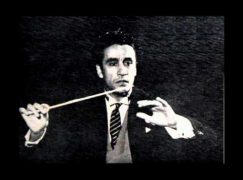 When Celi was chief of the Berlin Philharmonic…

… between the end of the War and Furtwängler’s return.

« A Whitsun treat: Celibidache does Romania