The League of American Orchestras has given $15,000 each to composers Stacy Garrop, Robin Holcomb, and Andrea Reinkemeyer. 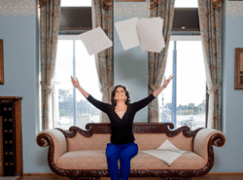