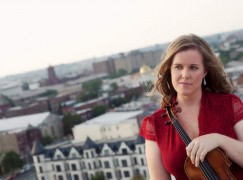 The concertmaster who auditioned in sweatpants

One of the benefits of blind auditions – a report from Deseret News:

SALT LAKE CITY — There’s a lot that can go wrong for a violinist during an audition. The weather could affect the instrument’s sound, the violin could go out of tune, a string could pop or a bow break.

But Madeline Adkins had a more unusual problem when she flew from Baltimore to Salt Lake City in 2015 to audition for the Utah Symphony’s concertmaster position: a lack of proper attire.

While Adkins’ violin survived the cross-country flight, her luggage did not. So when it came time to audition, the musician had no choice but to wear her sweats and rely on her violin to do the persuading. Fortunately for Adkins, the symphony had started a new audition process where even the final rounds of the audition were blind…

Just in: Maestro has fourth baby »