Some reservations about Mirga

The veteran, exemplary New York critic John Rockwell betook himself to Carnegie Hall for the Financial Times to hear the conducting sensation.

Now that the all-powerful administrator Deborah Borda has returned to the New York Philharmonic from Los Angeles, and given her continued overt admiration for her protégée — along with the Metropolitan Opera’s desperate need for stars on stage and in the pit — one suspects a continued presence for Gražinytė-Tyla. On Friday, the audience response was boisterously enthusiastic. I had some reservations. 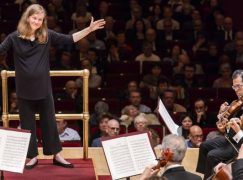