So which is America’s highest paid orchestra?

Drew McManus has been doing the math and it looks like the San Francisco Symphony is leading the field for 2017/18, overtaking the swagger of the LA Phil.

Into Drew’s calculations, we have inserted the Met Opera orchestra, which now ranks 7th, a notch behind the National Symphony of Washington DC who have crept up out of nowhere. 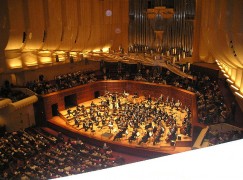 UPDATE: What other people earn in San Francisco.