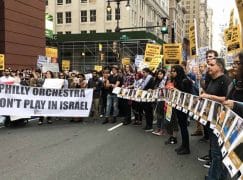 A persistent campaign to stop the Philadelphia Orchestra performing in Israel culminated in a concert disruption at the weekend.

According to the Inquirer’s report, it provoked music directorYannick Nézet-Séguin to slam his baton on the podium and walk off the stage. Some musicians began to leave, too, before the protesters, who were loudly booed by the audience, were forcibly removed.

One of the protestors played a pre-recorded message:

The concert continued and the tour will go ahead.