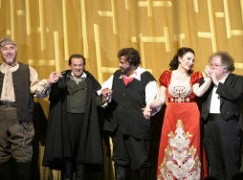 Slipped Disc’s exclusive report on the Met’s whitewashing of James Levine’s legacy from its satellite and radio channel has prompted widespread discussion about the rights and wrongs of airbrushing the historical record.

The Met has now told the Associated Press it is reviewing the ban and that Levine’s performances ‘will be reintroduced to the programming at an appropriate time.’

Good to see a rare, small victory for common sense.

A cool reception for Covent Garden’s Lessons in Love »