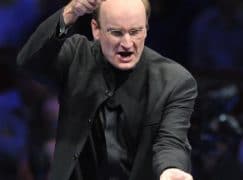 Andrew Manze is to be principal guest conductor of the Phil, starting now.

The former violinist is in the thick of recording an outstanding Vaughan Williams cycle. He is also Chief Conductor of the NDR Radiophilharmonie in Hanover.

press release: Liverpool Philharmonic is delighted to announce Andrew Manze, widely celebrated as one of the most stimulating and inspirational conductors of his generation, as Principal Guest Conductor of the Royal Liverpool Philharmonic Orchestra. His appointment, initially for three years, commences with the 2018-2019 concert season, which opens in September.