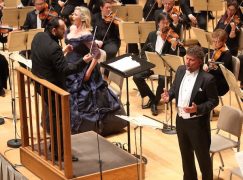 Jonas Kaufmann… has repeatedly failed to give satisfaction in New York

A very strange phrase in an NYRB review of Kaufmann’s Tristan Act 2 at Carnegie Hall.

As if a tenor exists only to give satisfaction in New York. Or that a critic’s job is to demand satisfaction.

Tristan und Isolde is an opera about longing, with a prelude whose unresolved musical line expresses the intensity of unsatisfiable desire and a famous signature chord (F, B, D sharp, G sharp) whose chromatic tension suggests the impossibility of finding satisfaction. The longing in Carnegie Hall was focused on tenor Jonas Kaufmann, who has repeatedly failed to give satisfaction in New York over recent years, with several cancellations, notably at the Metropolitan Opera. He is easily the most celebrated tenor in the world today, sings to great acclaim in a variety of styles, from Wagner to Puccini, and presents as glamorously handsome in almost any operatic costume. At the end of this performance, he was collecting so many bouquets that it began to seem a little insulting to the marvelous Finnish soprano singing Isolde, Camilla Nylund.

Here are some earlier reviews.

Finalists are named for Domingo’s Operalia. One of them is Long Long »