Pianist Lauren Zhang, 16, ran off with the BBC YM of 2018 with a daring, gravity-defying performance of Prokofiev’s 2nd concerto.

The composer could never have imagined the tough piece being played by a teenager… and with such intensity and expressiveness. 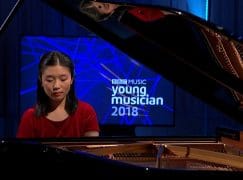 UPDATE: What we have learned since her win:

1 This was her first encounter with a professional orchestra.

2 She’s from Albuquerque, New Mexico, migrating to England in 2010 when she got a place at the Birmingham Conservatoire.

4 She has won a slot at the BBC Proms.

If you are in the UK, you can watch the final here.