They cut things fine in Dallas.

Geeting a call from his agent, bass-baritone Kyle Albertson jumped in an Uber from San Francisco Opera, where he was covering Wotan, and booked his flight from the cab.

The assistant conductor awaited him in a limo on arrival to run through a few tempo points on the way to Meyerson Symphony Center. Kyle changed into his concert suit in the car. 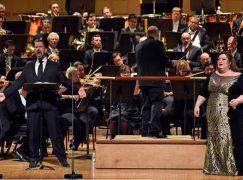