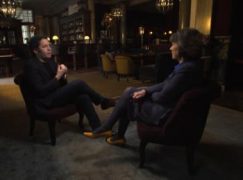 ‘El Sistema is my life,’ he tells CNN’s Christiane Armanpour.

So to get around the regime’s block on him working with the youth orchestras he conducts rehearsals with them online.

He avoids criticising the situation or the regime.

« Death of an iconic concertmaster, 94