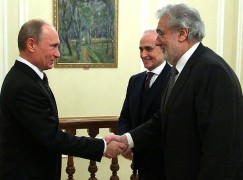 However, Roberto Alagna has pulled out. No reason given.