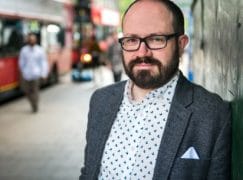 William Norris is leaving after three years as managing director of Tafelmusik, the baroque orchestra and choir.

Toronto, May 23, 2018 … Tafelmusik Board Chair Helen Polatajko announced today that William Norris has resigned from his position as Managing Director, his last day being July 4, 2018. Mr. Norris will be relocating to London. Ms. Polatajko also stated that Tafelmusik will immediately form a search committee and engage a search consultant to begin the process of appointing Tafelmusik’s next Managing Director.

“Over the past three years, William Norris has skillfully steered Tafelmusik through a period of profound change for the organization. During his tenure Elisa Citterio was appointed Music Director, and Tafelmusik has continued to build its stature as a global leader in period performance. We are extremely grateful to William for his dedication and leadership and wish him the very best in his new endeavour,” said Ms. Polatajko.

Norris was previously creative programming director at the Orchestra of the Age of Enlightenment.