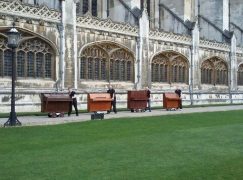 Cambridge is 24th for music in UK league table

The Guardian has published its annual league of university rankings for music, based mostly on degrees of student satisfaction.

Oxford des not make the top ten, and Cambridge, well….

Death of an Austro-Hungarian composer, 96 »