It s 45 years since she made her debut as Lucia in Treviso, becoming a stalwart of bel canto performance. 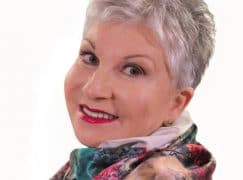