Airport alert: Will your viola pass the explosives test?

I was just held up extensively at Gatwick Airport – already a hassle and risk as the only airport that insists on hand searching every instrument – but this was new and scary.

My viola set off the alarm on the explosive swab test machine. This caused a full-scale interrogation, reports filed, handling of the instrument in a very inexperienced way. Ultimately, I was forced to send the viola through the X-ray machine without the case, lying in the plastic bucket and then left out of the case around luggage while various personnel discussed the situation. Majorly dangerous.

Apparently SUNSCREEN can set off the machine. Cosmetics often contain sunscreen and apparently even traces in sweat on the chin rest or neck can be enough. Of course, if the case had been allowed through the metal detector like at every other airport, none of this would have happened. I was told the threshold has been lowered for setting off the alarm. It took a lot of pleading and discussion to resolve this. Reasons to avoid Gatwick if at all possible. As if musicians needed any more airport stress! 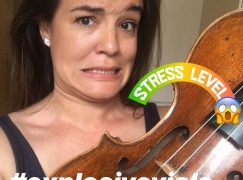