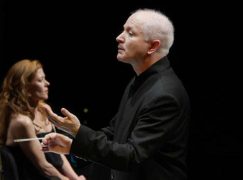 A cool reception for Covent Garden’s Lessons in Love

Alexandra Coghlan in theartsdesk.com, under the headline ‘Savage elegance never quite glows red-hot’: Three murders, two political coups, a deposition and a betrayal give the opera plenty of meat, but this isn’t a piece that’s interested in doing. If music is, famously, the space between the notes, then Benjamin and Crimp have devised a drama that lives between the scenes. The spare, suggestive beauty of Crimp’s libretto and Benjamin’s music (which never states when it can imply, never implies where it can simply leave a dramatic door ajar) leaves room for the audience, and having been invited into their cruel world it’s almost impossible to leave.

Barry Millington, Evening Standard: If there is a countervailing force of goodness or genuine love here, it escaped me.

Andrew Clements in The Guardian: There’s a pervading air of menace, but the drama’s implicit violence only becomes explicit in some of the orchestral interludes. If Benjamin’s score is not quite as luminous and beguiling as his orchestral writing in Written in Skin, there are still some remarkable colours and effects – soaring horn lines, long, self-renewing melodic strands, pungent punctuations from cimbalom and wooden percussion. That is matched in some of Benjamin’s vocal writing, especially Isabel’s spiralling melismas , tailor-made for Barbara Hannigan’s extraordinary agility, and the lustrous honeyed lines in the final scenes for the counter-tenor Son (who becomes Edward III), beautifully delivered by Samuel Boden…. In the end the terrible story becomes the excuse for some striking music rather than being driven along by it.

Rupert Christiansen, the Telegraph: ‘I left Covent Garden impressed rather than excited or moved. For all the refinements, Benjamin and Crimp haven’t moved on from Written on Skin so much as shuffled the cards to play the same game. Lessons in Love and Violence should be heard and seen by everyone seriously interested in the future of opera, but it lacks that magical element – surprise.’

Michael Church, the Independent: Benjamin’s fabled brilliance as an orchestrator produces a finely-wrought sonic tapestry: it’s as accessible as film music, but with original effects thanks to compositional alchemy and unfamiliar instruments including a cimbalom and steel drums. The vocal line may be relentless recitative, but the instrumental sound-world is a seductive amalgam of late-Romanticism and early-Modernism. The interludes with which the scenes are punctuated could be extracted to form the basis for a lovely orchestral suite. Benjamin insists that he doesn’t do ‘tunes’, but I left the theatre wishing that he occasionally would.

Alice Savile in Time Out: Avant-garde director Katie Mitchell is known for scandalising opera audiences with onstage brutality (notably her take on ‘Hamlet’) but this production has a dreamlike feel, sucking the audience into this king’s life-ruining romantic obsession. Stéphane Degout has the unworldliness of a man who’s so in love he can barely make sense of his surroundings. A collection of wooden panels, a giant fish tank, and some busts of great rulers appear and reappear in different formations in every scene. When Gaveston is murdered, the fish tank is drained of life.

Anne Ozorio, classical-iconoclast: Though the structure Benjamin uses is beautiful, like a series of miniature paintings in an illuminated album, it is also stylized and creates a sense of emotional disengagement.  It’s as if we’re observing specimens from a distance :the idea of fish in fish tanks, again. Nothing wrong with stylization, per se.  It was a feature of Greek tragedy, and is relevant to the wider implications of this tragedy, too. Thus the vocal lines are semi-abstract too, refecting Crimp’s background as poet.

A violist leaves the National after 50 years »