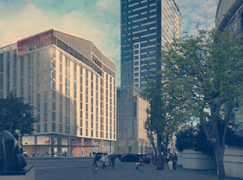 At $46.4 million, it is claimed to be the largest ever given to a music conservatory for a new facility.

SAN FRANCISCO, CA, APRIL 25, 2018 – The San Francisco Conservatory of Music (SFCM) announces the expansion of its campus and the construction of the Ute and William K. Bowes, Jr. Center for Performing Arts (The Bowes Center) in San Francisco’s Civic Center. The $185 million performing arts center and residential tower will be located at 200 Van Ness Avenue and construction will begin in the summer of 2018. The opening of the new building is slated for the fall of 2020 when it will welcome its first class of residents to a facility that will transform students through the study of music at the highest level. The name of the building is in honor and recognition of a financial gift of $46.4 million from the William K. Bowes, Jr. Foundation, which is the largest single gift ever made to a conservatory or music school for a new facility. To date, $96 million has been raised toward a fundraising goal of $110 million. The existing SFCM building at 50 Oak Street will remain in active use through the construction of the new building and after it is completed.

The new, 12-story building, designed by Mark Cavagnero Associates, will provide housing for 420 students and accommodate two concert halls (featuring hundreds of performances annually with over 90% of them free and open to the public), a restaurant with a live performance space, multiple classrooms and rehearsal spaces for ensembles, practice rooms, a recording studio and technology hall, a large observation deck and garden, conference facilities, a student center, and several apartments for visiting artists and faculty. In addition, the new building will include 27 apartments to replace the rent-stabilized residential units currently on site.

« Death of an international mezzo, 79