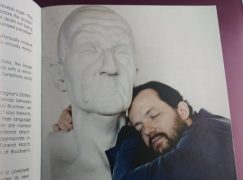 Two Bruckners that will shut your eyes

… The Gewandhaus can play this stuff in their sleep and sometimes it sounds as if that’s just what they are doing. There is a lack of momentum in the fourth symphony that is close to soporific and, though the seventh comes to life with those big slow-movement crescendos, it’s hard to feel that real Schwung is sustained to the end. A booklet picture of the conductor having a nap with a Bruckner bust does not help matters….

« ABBA reunite on a virtual tour for pre-millennials