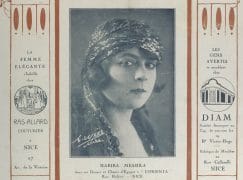 The Jewish singer the Arabs loved

There’s an illuminating article in History Today on the Tunisian singer Habiba Messika, whose music was received as a covert call for an Arab uprising.

Habiba was brutally murdered in 1930.

Between 1924 and 1930 Messika released a staggering number of phonograph records – close to 100 – for the Pathé, Gramophone and Baidaphon record labels. She was an accomplished actress, heralded as the ‘Second Sarah Bernhardt’ by her 21st birthday. Her style and looks also earned her a coterie of (male) fans known as the ‘soldiers of the night’, an ‘army’ which included Habib Bourguiba, who would become the first president of independent Tunisia in 1957. That Messika achieved so much, so quickly and did so at such a young age meant that her interwar funeral constituted one of the largest and most significant Tunisian gatherings of the early 20th century….

Is my Liszt faster than Kissin’s? »