They’re still arguing whether the 1973 concert audience objected to its first taste of minimalism, or actively erupted. 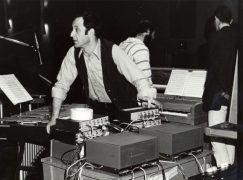