She once tied with Ashkenazy, but she never made a recording

He went on to make more records than any pianist of his time.

She never cut an album.

‘I developed a focal dystonia,’ says Norma, who became a distinguished teacher.

Now her live BBC performances are finally being released on record. 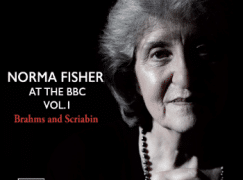 From her triumph in the 1963 Harriet Cohen International Music Awards, when she jointly won first prize alongside Vladimir Ashkenazy, it seemed clear that the English pianist Norma Fisher would have a long career at the highest level. And performances at the highest level did indeed follow, with a Proms debut that same year and many and regular appearances with the London Symphony Orchestra, Philharmonia, Royal Philharmonic, BBC Symphony Orchestra, CBSO and the like. She quickly became beloved of audiences, with piano fans hailing her as one of the finest pianists the country had ever produced. Yet to the surprise of many, in the late 1990’s and at the height of her art, she abruptly ceased playing. A second career blossomed as she became one of the most sought-after and admired piano teachers. Her many fans will be thrilled therefore by news of the new archive recording by Sonetto Classics – incredibly, her first-ever commercial release – “Norma Fisher At The BBC, Vol. 1”.

And even as she welcomes this release, Norma Fisher reveals the reason she had to cease playing. “I developed a focal dystonia,” she says, “a highly-debilitating neurological condition that affected my right hand, causing the muscles to seize up without warning. Public performances became unbearably nerve-wracking, knowing that at any moment my hand could just stop working. It never actually happened mid-way through a concert, but I didn’t want to inflict that on myself or an audience and it seemed only a matter of time before it could actually do so.” So she reinvented herself, the great pianist becoming a great teacher, now a professor of piano at the Royal College of Music in London, a Fellow of the Royal Northern College of Music in Manchester, and Artistic Director of London Master Classes.

The Sonetto Classics release, the first in a projected series, features some of her very finest broadcast performances from the archives of the BBC – including, from 1972, Brahms’s Variations on an Original Theme and Variations on a Hungarian Song (Opus 21, Nos. 1 and 2); from 1979, Scriabin’s Piano Sonata No. 1 and Scriabin’s Etudes Nos. 1, 4, 5 and 8(Opus 42). The recordings were lovingly remastered by Sonetto Classics’s producer and CEO Tomoyuki Sawado, and engineer Andrew J.Holdsworth.

“I am beyond thrilled with the selection,” says Fisher, ” Brahms was always my first love; the size and depth of sound demanded totally suited my physical approach, while his emotional demands came naturally to me. I played the Brahms 2nd and 3rd sonatas throughout my career, as well as the Brahms-Handel and Schumann Variations – but I ‘lost my heart’ to these Variations Op 21 and am so thrilled to have these recordings to treasure! The 2nd Concerto was one of the last things I played in public, at the Barbican.

“And these Scriabin works I learnt at the BBC’s request, never having played him before, when I was invited to contribute, in 1972, to their series marking the 100th anniversary of his birth. I discovered a natural and glorious affinity with Scriabin’s spirit and sound-world!”