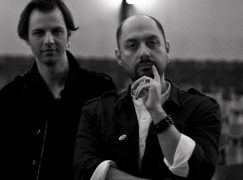 Russia’s top theatre award is given to arrested director

Kirill Serebrennikov was unavailable to accept his 2018 Golden Mask award in Moscow last night as best director. He has been under house arrest for much of the past year, awaiting possible trial on what appear to be political charges.

The award was a sign of a sturdy independence still throbbing through Russian theatre. Long may it last.

Other winners included the conductors Teodor Currentzis and Oliver Dohnanyi.

‘We all believe that this injustice will be corrected and they will be with us here, free. Let’s wish them to get their freedom soon,’ said Alexei Bartoshevich, chairperson of the Golden Mask, referring not just to Serebrennikov, but his colleagues, who face the same charges: Alexei Malobrodsky, Yury Itin and Sophia Appelbaum. These names were mentioned by almost every presenter on stage.

Silliest album shot of the century »