Newton Mansfield, a fixture in the NY Phil since 1961, died yesterday, his son reports.

Of Polish birth, he made his debut in Paris in 1938 and went on to play in Houston, Baltimore, Pittsburgh and the Met before joining Leonard Bernstein’s orchestra in ’61 and staying there for the rest of his working life, retiring in 2016 as one of the world’s longest-serving players.

He loved to play. 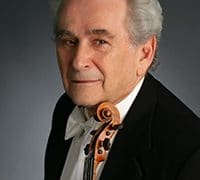