Did the Met just hear the next Joan Sutherland?

Jessica Pratt came on for the last two performances of Lucia di Lammermoor at the Metropolitan Opera this week.

She had been on standby for Olga Peretiatko, who was not outstanding.

This is what happened at Jessica’s curtain:

Jessica is a British-born Australian. In some quarters, comparisons were being drawn with Joan Sutherland, who owned the role. 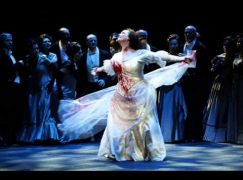