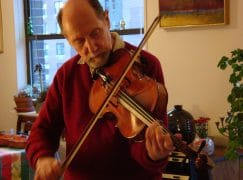 Death of a viola legend, 84

Michael Tree died last night at his home in New York at the age of 84.

Son of the noted violin pedagogue Samuel Applebaum, Michael studied Efrem Zimbalist and appeared as soloist with many orchestras and on numerous recordings.

He was co-founder of the Guarneri Quartet, with Arnold Steinhart, John Dally and David Soyer. They played together for 45 years and were America’s most recorded and widely toured string quartet.

Michael was mentor to dozens, perhaps hundreds, of viola players.

« The world’s next concert hall will look something like this

I played Carnegie Hall twice before I was 13 »