Cohen, 23, was one of the winners of last year’s Met auditions. He’s going places. 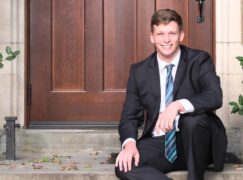