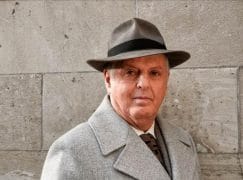 The Berlin conductor will make his debut in Britten country this August.

Roger Wright, former head of BBC Proms and now chief exec at Aldeburgh, will be presenting Barenboim with his WEDO orchestra at the Snape Proms – ahead of their appearance at the Royal Albert Hall.

Snape Maltings is one of the world’s leading centres of music, hosting outstanding concerts and festivals throughout the year. This year’s Snape Proms returns 1-31 August for a month of music, featuring some of the best artists from the worlds of classical music, jazz, blues, folk and pop.

Daniel Barenboim and his West-Eastern Divan Orchestra, comprised of young musicians from both Arab and Israeli backgrounds, make their Snape Maltings debut on 13 August with the UK premiere of Looking for Palestine by David Robert Coleman, Scriabin’s exhilarating tone poem The Poem of Ecstasy, and Brahms’ Violin Concerto with soloist Lisa Batiashvili. Fresh from their performances at the Aldeburgh Festival, on 14 August the John Wilson Orchestra pays tribute to the songs of the female stars of Hollywood’s golden age, performing original film orchestrations painstakingly restored by conductor John Wilson, with Kim Criswell giving voice to songs sung by Judy Garland, Lena Horne, Alice Faye, and Jeanette MacDonald to Julia Andrews, Shirley Jones and Barbra Streisand. On 18 August, the Aurora Orchestra conducted by Nicholas Collon perform Beethoven’s Symphony No.5 from memory and are joined by pianist Imogen Cooper in Mozart’s Piano Concerto No.25. Meanwhile on 8 August, straight from recording the pieces, violinist Rachel Podger and Brecon Baroque perform Vivaldi’s The Four Seasons.

On 10 August the outstanding young Trio Isimsiz, whose talents have been nurtured by Snape Maltings, play piano trios by Haydn, Mendelssohn and Brahms. On 16 August pianist Christian Blackshaw, renowned for his performances of Schubert and Mozart, brings a new collaboration with principal players of the Berliner Philharmoniker. Together they play Schubert’s ‘Trout’ Quintet and piano quartets by Mozart. The Takács String Quartet performs music by Mozart, Dvořák and Mendelssohn on 17 August, while on 21 August Angela Hewitt gives a recital of the first book of Bach’s Well-Tempered Clavier. Guitarist Miloš Karadaglić’s programme on 24 August with The Balanas Strings is a typically wide ranging one, performing everything from Bach to Spanish and Latin American music, plus his own arrangement of music by The Beatles.

The development of young artists has always been central to Snape Maltings’ vision. Marin Alsop conducts three concerts with the Britten-Pears Orchestra, part of the Britten–Pears Young Artists Programme, which provides opportunities for

exceptional young professionals to work closely with leading conductors, soloists and tutors. The first concert on 3 August is full of memorable melodies and celebrates childhood, with Ravel’sMother Goose, Prokofiev’s ‘Classical’ Symphony and Saint-Saëns’ Carnival of the Animals, a piece they play again in a family concert on 5 Augustalongside Prokofiev’s Peter and the Wolf narrated by Tom Redmond. Their third concert together on 11 August picks up where they first left off – with ballet, in the exuberant form of Pr

okofiev’s Romeo and Juliet. The National Youth Orchestra of Great Britain conducted by George Benjamin perform a concert on 2 August that revels in the glorious variety of sounds and moods conjured by a huge symphony orchestra. From Debussy’s gorgeous sonic seascape to the fire and fury of Mussorgsky’s Witches Sabbath, George Benjamin’s Dance Figures, surges and sings, juxtaposed with Ligeti’s eerie study in extreme quiet. In the midst of the kaleidoscope of orchestral sounds is Ravel’s thrilling Piano Concerto for the Left Hand played byTamara Stefanovich. The annual Snape Prom is the highlight of Suffolk Youth Orchestra’s year and they return on 5 August with conductor Philip Shawto perform Rimsky Korsakov, Butterworth, Ravel/Mussorgsky and Joaquin Turina. On 25 August, Ben Parry and Aldeburgh Voices lead a family-friendly singalong of Disney songs and Ben Parry returns with the National Youth Choir of Great Britain on 27 August, celebrating through song the abundant creativity of those living with mental health conditions.

Experience a lifetime of music in one evening on 31 August as South Africa’s legendary jazz pianist Abdullah Ibrahim performs an intimate solo show. He brings together his upbringing of gospel, jive, American jazz & classical music with the music of his jazz heroes such as Ellington and Coltrane. Michael Law’s classic dance band the Piccadilly Dance Orchestra celebrates its 30th birthday by teaming up with Strictly Come Dancing singer Lance Ellington in a special new show on 4 August featuring music from the golden era of British dance bands, plus music made famous byBing Crosby and Frank Sinatra. The Blues Band on 6 August celebrate rhythm and blues in all their forms. With songs introduced with dry asides and plentiful anecdotes, this ensemble gives full voice to the simplicity and heartfelt expression of the blues. On 7 August, pianist Roberto Fonseca and his trio bring Cuba’s trademark rhythms and melodies to Snape, mixed with his own music. Later that week, on 9 August, saxophonist Courtney Pinejo

ins forces with soul star Omar for a collaboration of verve and imagination, backed by a peerless band. On 15 August, jazz musician Georgie Famebrings his unmistakeable velvety smooth voice and blend of jazz and rhythm & blues back to Snape with one of the most versatile jazz orchestras: the BBC Big Band. The jazz celebration continues when rising star Hailey Tuck makes her Snape debut. With a voice that sits somewhere between Billie Holiday, Regina Spektor and Ella Fitzgerald, as a teenager from Texas, Tuck took off to Paris with her college fund and a dream of becoming a jazz singer: she proves why she’s made it on 23 August. On 26 August, The Dime Notes transports us back in time to the birthplace of jazz, New Orleans in the tricentenary year of the great city. Andrew Oliver and his quartet remind us of the unforgettable sound of one of the great eras in jazz history.

Jeanette Sorrell and her American baroque orchestra Apollo’s Fire arrive in Snape on 12 August for an Appalachian folk gathering. It is a raucous celebration of the soulful music born in the in the mountain range after which it was named. Ambassadors for traditional Irish music Altan perform on 22 August, faithfully keeping to the old Gaelic singing styles and fiddle jigs whilst embracing a truly international outlook. Their live sets, now tinged with bluegrass and American roots music, bristle with instrumental virtuosity and seduce with touching old Irish songs. Jon Boden’s new musical boundaries post-Bellowhead continue to inspire and intrigue: his Remnant Kings is another all-star folk collective who perform on 30 August. It’s a miraculous alchemy of Boden’s irrepressible charisma, prog-rock, pop and folk and a testament to the prodigious imagination of a prolific song-writer clearly at the very top of his game.