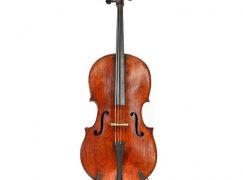 Steven Honigberg has produced a video tribute to John Martin, sharp-tongued principal cello of the National Symphony Orchestra, where the greatest cellist on earth, Mstislav Rostrpovich, was music director.

‘Slava just loved him and his originality,’ remembers Steven. ‘John’s sense of humor made Slava crack up like you wouldn’t believe. This film is based on an interview I did with John in 1987. I was 25, John was 64. After years of accumulating photos and as much press as I could find, I was able to piece something meaningful together.’

« Where Herbert von Karajan got his high heels