Results in the Copenhagen-based Malko Competition:

1 Ryan Bancroft, 28, US, who also won the audience prize. 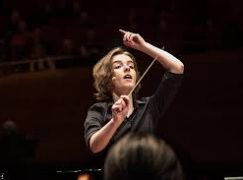 « US music director is suspended in Germany