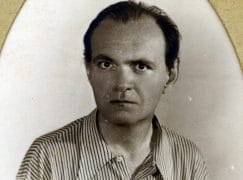 A Catholic composer who was murdered at Auschwitz

On Holocaust memorial day, JoAnn Falletta, has been telling the story of Marcel Tyberg, a devout Croatian Catholic who was murdered by the Nazis and remained unknown until one of his students delivered his music to the Buffalo music director.

One day, maybe a couple of years after I became music director;  I remember it was a terribly rainy day in Buffalo, and I got off the stage after rehearsal and standing at the door of my dressing room was this older gentleman, just drenched, wearing a raincoat, dripping water, carrying a shopping bag. I had never met him before.

It was Dr. Enrico Mihich [the son of Milan Mihich].
He said, “I have to speak to you. It’s very important.” He was the kind of person, when he said it was very important, you listened to him.

We went into my dressing room.  He told me that story. He said, I know this is wonderful music. It’s great music.  It needs to be played.  I’ve tried with every music director and they haven’t been able to do it.

I looked at the music and I knew why they said no. It was almost illegible. The score had been handwritten, the pages were frayed, pieces were missing. It was almost impossible to read this European handwriting.

Just in: German concert is cancelled due to wartime bomb »