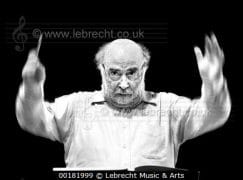 by Joel Cohen of the Boston Camerata, special to Slipped Disc 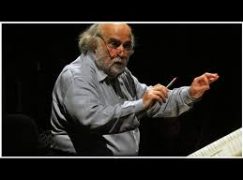 The main thing to know about Jean-Claude Malgoire (who died this month) was that he was a vivacious, imaginative, and intensely musical human being. The rest, as the saying goes, is commentary.

I remember Jean-Claude, short, bearded, and stocky, a demonstrative Mediterranean born and bred, serving his own, homemade, bean-and- basil soupe au pistou to a small gathering of guests he had invited to his table in the little village house he had purchased a few kilometers north of Aix-en-Provence. “What’s the matter with all of you?” he chided us in his Provençal brogue, as he piled on  second and third helpings of his thick, delicious concoction. “Vous n’êtes pas de vrais mangeurs!”

Jean-Claude invariably approached any of his activities – eating, directing an ensemble, riding his motorcycle, charming the ladies (he was good at this, despite his less-than- Grecian physique) with inimitable verve and imagination. He was not cautious and reserved; he was not buttoned-down. The energy and zest poured out of him.

There was nothing methodical or plodding about his approach to music. His manner was spontaneous, quasi-improvisational, and that in-the- moment approach, one of his most appealing traits, also got him into trouble at times. “I hate to rehearse,” he confided in me once. “What I enjoy is performing.” Sometimes the loose ends would show during concerts. But at its best, the Malgoire manner could produce thrilling moments, as when he decided, almost last-minute, to incorporate several wind machines during the mid-1970s commercial recording of a tempest scene in a Lully opera. I was told to leave off my continuo playing on the lute, and to stand at the back of the orchestra to manipulate one of these noisy gadgets. Whoosh! four of us operators went, making one hell of a racket as the pitched instruments played. It was goose-bumpy. And, as I recall, the recording came out very well.

Another recording, made well before his start as an ensemble leader and conductor, but in somewhat the same spirit, came out more than well – in fact, it is, in my opinion, one of the supreme glories in the history of recorded French repertoire. It’s the aria of Marguerite, “D’amour l’ardente flamme,” from Berlioz “Damnation de Faust,” as performed by Dame Janet Baker, circa 1965, with the Orchestre de Paris, and Jean-Claude as solo English horn. For the purposes of writing this paper, I just downloaded that performance from Amazon, and relistened, and it is every bit as hair-raisingly good as I remember it, when Magloire first played it for me on his scratchy turntable, at his village house in Saint-Martin-de-la Brasque. Do listen to this track if you have the time and inclination. Dame Janet is heart-rendingly magnificent, and Jean-Claude’s English horn, marvelously sensitive and empathetic, serves as Marguerite’s soul or second self, a doppelgänger of the vocal soloist. Incredibly, he even takes on at places Dame Janet’s characteristic vocal color, doing some kind of inexplicable magic with his instrument to create a musical and emotional unity with her. Only a musician of incredible skill, refinement, and control could have produced that result.

Jean-Claude was proud of that achievement. He told me that Dame Janet was a last-minute replacement for another, ailing mezzo, that she had flown in from London to the recording venue, and recorded the track, on the spot, with no rehearsal. That’s the kind of blessed moment Magloire strove for, and when everything worked and came together, life had joy, purpose, and meaning. He told me that it was the great Charles Munch, mentor to the young Orchestre de Paris, who recognized his talents, and who encouraged him to go beyond orchestral playing, and into musical direction. His workaround to the cumbersome French musical establishment, permitting him a faster track towards a new career, was the founding of two early music ensembles: Florilegium Musicum, for medieval and Renaissance repertoires, and La Grande Ecurie et la Chambre du Roi, for baroque music of the 17 th and 18 th centuries I performed with both groups, for a couple of seasons.

These were pioneering efforts; in France circa 1975 there was not a large pool of early-instrument specialists. Jean-Claude drew on his friendships within the Orchestre, and his ensembles of that epoch were composed largely of modern instruments, at 20th century orchestral pitch (A=440, or perhaps a cent or two higher). Inevitably, there had to be rehearsals, and Jean-Claude led them with sheer vital energy, relying on the very considerable métier of his first-desk orchestral players, and dwelling less than some other conductors on refinement of detail, or certain niceties of baroque style. He had the immense virtue of bringing important French music of earlier centuries back into the spotlight, and doing so with considerable élan vital.

And he did so at considerable risk to himself. As I recall from his narrative to me, when he led Rameau’s “Les Indes Galantes” at the Château of Versailles, the budget was short, and he took on substantial personal debt so that the show could go on, feathery costumes and all. He prepared his own editions of many works, directly transcribing Lully music from the Philidor manuscripts at the

Bibliothèque Nationale. He was forever imagining new projects, and exploring different repertoires. I am glad he was eventually entrusted with his own theater and company, as a richly deserved compensation for those pioneering years.

He liked to say, when criticized now and then for his full-steam- ahead approach to rehearsals and performance, “Well they say I am a brute. OK, I’m a brute! That’s just the way it is.” But in fact, Jean-Claude Magloire was a much more complex being than that. He indeed had vigor in him, and plenty of Southern French theatricality. He also had a capacity for enormous delicacy and sensitivity. I see via the internet that he has received many tributes since his recent death; such attention is richly deserved.

His work done, may he rest in peace.

« Maestro, 90, is endowed with the rising sun

How Leonard Bernstein failed to transform the New York Philharmonic »