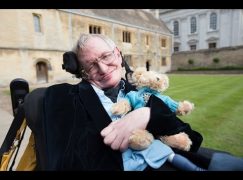 Stephen Hawking loved Stravinsky, Poulenc and the music of the spheres

The Cambridge cosmologist, who died today, discovered serious music in his teens:

‘I first became aware of classical music when I was 15,” he said. “LPs had recently appeared in Britain. I ripped out the mechanism of our old wind-up gramophone and put in a turntable and a three-valve amplifier. I made a speaker cabinet from an old book case, with a sheet of chip-board on the front. The whole system looked pretty crude, but it didn’t sound too bad.

‘At the time LPs were very expensive so I couldn’t afford any of them on a schoolboy budget. But I bought Stravinsky’s Symphony Of Psalms because it was on sale as a 10” LP, which were being phased out. The record was rather scratched, but I fell in love with the third movement, which makes up more than half the symphony…’

Death of an African-American composer, 80 »