From the newly published memoirs of Andrew Lloyd Webber:

Among the proudest moments of my career was when one of my heroes, Dmitri Shostakovich, saw the production in 1975, said he wished he’d composed it and really liked the way the rock section underpinned the woodwind and the brass. 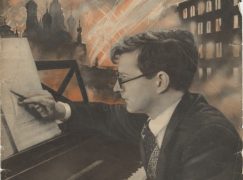 DSCH was a very polite man.