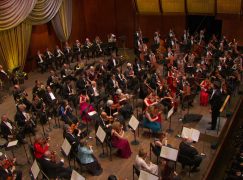 Deborah Borda has concluded a three-year pay deal with the musicians to ensure a smooth start for the new music director Jaap Van Zweden.

The players get a 4.5 percent increase. Both sides seem content.

Across Lincoln Center, the Metropolitan Opera is about to enter another horrible wrangle with its musicians.

The New York Philharmonic and American Federation of Musicians Local 802, which represents the Musicians of the Orchestra, jointly announce an agreement on a new three-year contract. The agreement, which was ratified by the musicians on Thursday, March 1, 2018, calls for a 4.5% increase in wages over three years. The contract will culminate on September 20, 2020, and replaces the previous contract, which expired on September 20, 2017.

“The members of the New York Philharmonic Board and administration hold the highest respect for the skill, artistry, and dedication of these world-class musicians,” saidDeborah Borda, President & CEO of the New York Philharmonic. “We also greatly value the long-standing spirit of partnership that allows the entire organization to move forward and fulfill its artistic mission.”

“The musicians of the New York Philharmonic are devoted to bringing world-class artistry and passion to all we do and are proud of the hard work we put in every day to ensure this ensemble continues to be regarded as among the most important artistic institutions in the world,” said Nathan Vickery, cellist, Chair of Orchestra Negotiation Committee. “The artistic standards that make the Philharmonic world-renowned will remain highest when the musicians who make music each and every night are supported. With negotiations behind us, this orchestra can focus on the music and artistry for which the Philharmonic is internationally known.”

“The musicians of the New York Philharmonic play a vital role in ensuring New York City’s status as a global leader in arts and culture,” said Tino Gagliardi, President, Local 802, AFM. “Contract negotiations are never easy, and as a new Music Director and leadership team take the helm at this institution, it is our hope that this agreement will mark the beginning of a new era which strives to retain the talent that fuels the institution’s worldwide renown.”

« Einstein’s violin is up for sale