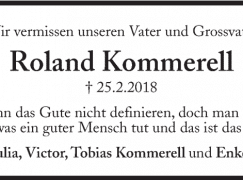 Mourning for a classical record chief

We hear that Roland Kommerell died on February 25 in Hamburg at the age of 86.

He was president of Decca from boomtime 1986 to the fateful year of 1996 when he was succeeded by Roger Lewis and Decca, along with other classical labels, went into tailspin.

Roland was responsible for authorising the Three Tenors extravaganza of 1990 and for the trailblazing Entartete Musik series which brought back composers who had been banned by the Nazis.

Roland’s uncle had been associated with the Nazi philosopher Martin Heidegger and the bold Entartete series was, for his nephew, a form of personal reparation.

May he enjoy eternal rest.

« Barenboim and Ashkenazy: Feel the tension

A medical emergency at the Houston Symphony »