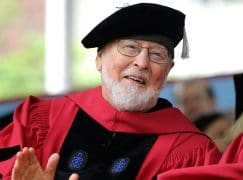 Just in: John Williams leaves all his scores to Juilliard

NEW YORK  ––  The Juilliard School announced today that it has received a bequest from Academy Award-winning composer and conductor John Williams of his complete library of concert music and film music scores as well as his sketchbooks. Mr. Williams, who studied piano with longtime Juilliard faculty member Rosina Lhévinne, announced the gift at a special alumni event held in Los Angeles at the Four Seasons Beverly Hills, where Mr. Williams was also presented with a President’s Medal by Juilliard President Joseph W. Polisi.

Acknowledging this gift, Juilliard President Joseph W. Polisi said, “We are deeply grateful to John for his extraordinary generosity in bequeathing Juilliard his extensive library of both concert and film scores. John has been a wonderful friend and colleague for many years. His artistry, creativity, and endless imagination make him one of the most admired and respected musicians of our time. His gift will be a unique resource for all of our musicians at the school, particularly composition students who can study first-hand John’s breadth and versatility as a composer.”

“Since my earliest days as a fledgling piano student, I have looked up to the Juilliard School as the Mecca for the study of music in our country and beyond,” Mr. Williams said. “It’s therefore a privilege for me to donate my sketches, papers, and scores to Juilliard, to be made available to those students particularly interested in the intimate processes of film scoring.“

UPDATE: John Williams builds up his London base.