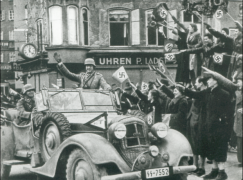 Eighty years after the so-called “Anschluss” (Annexation of Austria) of 1938 the Wiener Staatsoper will remember the darkest years in the history of the House with an exhibition in the Gustav Mahler-Saal which will run from Tuesday, 13th March 2018.

On 12th March 1938 German troops crossed the border into Austria, on 13th March the Federal Constitutional Order on the Unification of Austria with the German Reich was issued. Its consequences also profoundly affected artists and institutions – at the Wiener Staatsoper, performers as well as members of staff were murdered, persecuted and dismissed, the very soul of the house was ripped apart.

Building on the exhibition “Victims, persecutors, spectators” from 2008 commemorating 70 years after the Annexation, the implacability and vandalism of the National Socialist regime will be told through individual stories. Alongside the personal, the exhibition also documents the effects of terror on the politics of the repertoire of the
Wiener Staatsoper: censorship and the effect that the years between 1938 and 1945 had on the repertoire will be explained – several works and composers disappeared from the repertoire of the Wiener Staatsoper. The exhibition will also shed light on the side of the perpetrators and profiteers.

Curated by dramaturgs Dr. Andreas Láng and Dr. Oliver Láng, the exhibition can be seen in the Gustav Mahler-Saal when visiting for a performance until the middle of May 2018.