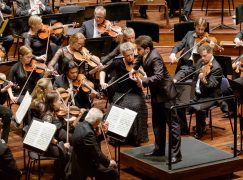 Amir Mandel in Haaretz has the background story of a young man’s vertical ascent.

He follows a simple rule:  ‘If it sounds good, don’t interfere. My responsibility as a conductor is to ensure that the orchestra sounds good according to my understanding, not to impose myself. I have to intervene in places where I want to emphasize something, change something, go deeper into certain details in the musical text that perhaps we didn’t dive into, or perhaps to reexamine something we’ve grown accustomed to out of habit and that’s worth reconsidering.’

His childhood teacher says: ‘He demonstrated unequivocal musical talent, but he was also an individualist and not terribly diligent, and because he played everything easily from hearing it, he found learning the notes fatiguing. He was incredibly unexcitable and in fact not ambitious. Success, failure – nothing disturbed his calm.’

« Death of a noted concertmaster, 60

An Oscar for 12 London flutes »