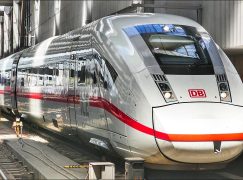 Deutsche Bahn has been wondering what names to give its new generation of ICE trains.

So it asked the German public for suggestions, having reserved a slot for Ludwig van Beethoven on his 250th anniversary in 2020. Martin Luther has already got the first ICE train named after him.

But the railway has now changed its mind. nne Frank, it puffed, might awaken painful memories, and Karl Marx is a bit, er, controversial.

So all future trains will be named after lakes and mountains and Beethoven won’t get his name on an engine.

Luther, however, gets to keep his train.

« Toronto: Why conductor was suspended

Composer of the world’s longest running musical has died, at 88 »