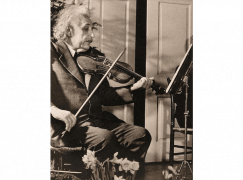 Einstein’s violin is up for sale

Bonhams New York are estimating $100-150,000 for the March 9 sale of a violin that once belonged to Albert Einstein.

Steger was a cabinet maker and member of the Harrisburg Symphony Orchestra. He made the violin for Einstein on hearing that the physicist, a passionate amateur violinist, was to be resident scholar at Princeton.

Einstein passed on the violin to Lawrence Wilson Hibbs, son of a Princeton janitor and handyman Sylas Hibbs, and it has remained in the Hibbs family ever since.

« Toronto Symphony ex-boss is divorced without a pay-off