Death of an Oistrakh student, 81

In 1957, at the age of 20, Dejan Bravničar was allowed to leave Yugoslavia to study in David Oistrakh’s class in the Moscow Conservatoire.

The experience was decisive, raising a provincial violinist to international standard and introducing him to such conductors as Kondrashin and Sanderling who would advance his career.

But Bravničar, concerned for his roots, returned to Ljubljana to teach at its Academy of Music and serve as its dean. He died this week a Slovene hero, largely forgotten abroad. 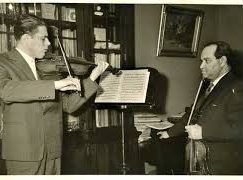 « Last of the red shoes is gone

Danielle De Niese: I was protected from #MeToo »