Death of a noted concertmaster, 60

Serguei Azizian, professor of violin at the Royal Conservatory in Copenhagen, has suddenly died.

Serguei was an important figure in Danish musical life, winner of the 2009 Carl Nielsen and Anne-Marie Carl Nielsen Award. 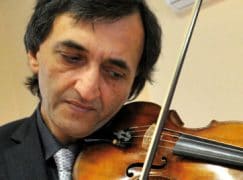