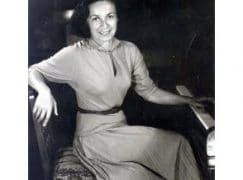 Death of a major Hungarian pianist, 101

Lívia Rév, who died in Paris on March 28, studied with Leo Weiner at the Liszt Academy.

Fleeing Hungary in 1946, she made her first recordings in Vienna the following year and went on to play with Jochum, Kubelik, Horenstein, Beecham, Boult and other leading conductors.

After marriage to a Frenchman, Pierre Aubé, she gave up the touring life and settled down with family and students.

Some recordings may have appeared under her pre-War name, Rauchberger. Her best-known work appeared on Saga.