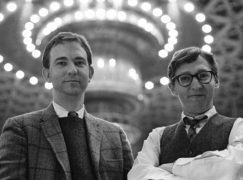 Composer of the world’s longest running musical has died, at 88

In May 1960 he opened The Fantasticks at the Sullivan Street Playhouse. It ran there until 2002, setting a new record for musical shows. Revived in 2006, it ran a further 11 years.

Its hit song is indelible.

Schmidt, with his fellow-Texan Tom Jones, also wrote 110 in the Shade.

Death of a leading international conductor, 78 »