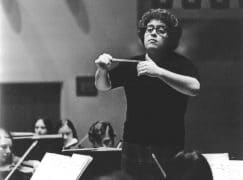 Lynn Harrell is among half a dozen musicians who talks to a Boston Globe investigation about the sex cult that James Levine formed with youngsters in Cleveland when he was a rising star in his twenties.

Another witness, James Lestock, identifies himself as a musician who testified to me more than 20 years ago about James Levine’s sex games and abuses (Lestock was not the only one, and I always protected my sources).

Some members recalled an evening when Levine, sitting in a recliner, groped one of the few female students in the group — an episode Lestock said he shared more than 20 years ago with journalist Norman Lebrecht, who included a similar version of the incident in his book “Who Killed Classical Music?”

“This was not a sexual thing,” said Smith, who said he also witnessed the incident. “It was like a power play, a control thing.”

Lestock, who last saw Levine in 1978, said he received a call from Levine as Lebrecht’s book went to print.

“He voluntarily said that he had abused others,” recalled Lestock. “He didn’t name names; I didn’t ask. He brought up that point and said that out loud.”

Levine denies past misconduct. The Met and Boston Symphony are investigating allegations against him.

« To succeed in chamber music, first learn to cook

How a brilliant composer blew his talent on admin »