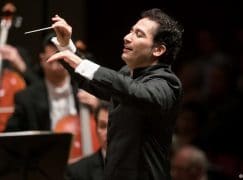 A medical emergency at the Houston Symphony

A report by Deutsche Welle, ahead of the orchestra’s European tour:

He drives the music forward with wide, sweeping gestures, cajoling and beseeching his musicians, coaxing, teasing, sometimes conspiring, seemingly trying to maintain eye contact with each of the more than 100 players simultaneously.

Then, during the fourth movement of Antonín Dvořák’s Seventh Symphony, after 30 minutes of building tension, a door suddenly opens on one side. Voices are heard, someone lies on the floor. Awash in an orchestral fortissimo, the conductor registers the apparent medical emergency and stops the performance even though it is being broadcast live on radio. A few seconds later the door closes, and he leads the concert to a furioso conclusion, as though it were the most natural thing in the world.

“I didn’t want to ignore it, but to respect the situation and then keep going from where we broke off,” Andrés Orozco-Estrada later explained to DW. “It was unexpected, of course, but that’s how life sometimes is.”

The reaction to the emergency and the explanation sum up this conductor: On top of the moment, he reacts spontaneously – and keeps his cool. To him, a work of classical music is not sacred and distant but fully rooted in the here and now….

« Mourning for a classical record chief

Do you give the first lesson for free? »